Background
One mechanism by which checkpoints maintain the fidelity of cell cycle events is through blocking mitosis in response to unreplicated or damaged DNA. In most species this occurs through inhibiting activation of the cyclic-dependent kinase cdc2, which regulates entry in to mitosis. Chk1, a kinase involved in the DNA damage checkpoint response can phosphorylate Cdc25C an activator of cdc2. It is hypothesized that chk 1 induces serine 216 phosphorylation of Cdc 25C and subsequent binding negatively regulated Cdc25C, thus preventing it from activating cdc2.

Source
Sheep were immunized with a protein corresponding to amino acid sequence 1-474 of human chk-1, having a molecular weight of 54 kDa. 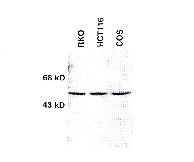