Background
Caspases are a family of cysteine proteases that can be divided into the apoptotic and inflammatory caspase subfamilies. Unlike the apoptotic caspases, members of the inflammatory subfamily are generally not involved in cell death but are associated with the immune response to microbial pathogens (reviewed in 1). Members of this subfamily include caspase-1, -4, -5, and -12. Activation of these caspases results in the cleavage and activation of proinflammatory cytokines such as IL-1beta and IL-18 (2,3). Caspase-4 was initially identified as a homologous protein to Caspase-1 and the C. elegans Ced-3 which could induce apoptosis in transfected cells (4). More recent studies have shown that it can be activated by ER stress and has been suggested to be involved in multiple neuronal pathologies such as AlzheimerÕs disease (5).

Immunogen: Rabbit polyclonal Caspase-4 antibody was raised against a 16 amino acid peptide from the amino-terminus of human Caspase-4.

Applications
Casp-4 (NT) antibody can be used for the detection of Caspase-4 by Western blot at 1 ug/ml. Depending on cell lines or tissues used, other cleavage products may be observed. Antibody can also be used for immunohistochemistry (2-4 µg/ml starting dilution). Optimal concentration should be evaluated by serial dilutions.

Positive Control: Widely expressed, with highest levels in spleen and lung. Moderate expression in heart and liver, low expression in skeletal muscle, kidney and testis. Not found in the brain. 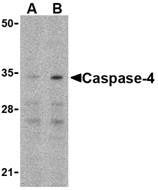