It’s easy to understand why IgY was first categorized as an immunoglobulin G – it’s similar to mammalian IgG (see Figure on right). 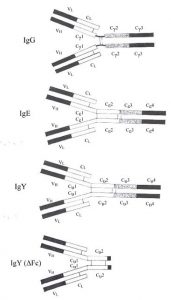 Like IgG, IgY also has 2 heavy and 2 light chains, shaped in the characteristic Y shape with an antigen valency of 2. IgY and IgG share a similar sedimentation coefficient of about 7S and both are eluted from DEAE cellulose with low ionic strength buffers. Functionally, they play a similar biological role as well. Both IgG and IgY are the major immunoglobulins providing defense against infectious agents and appear in blood at high concentrations following synthesis of a higher molecular weight antibody (IgM).

There are striking differences however: There is little or no immunological cross-reactivity between IgY and mammalian IgG. IgY has a higher molecular weight due to an extra heavy chain constant domain, lacks a well-defined hinge region and has unique oligosaccharide sidechains1. It has been proposed that the extra domain (CH2) may be the evolutionary precursor to the mammalian IgG hinge region2. IgY is capable of mediating anaphylactic reactions, a function limited to IgE in mammals. In fact, other similarities between IgY and IgE (see Comparison of IgG, IgE, IgY and IgY (ΔFc) and Figure to the right), including similar intrachain disulphide bonding in their extra heavy chain domain, have led some to suggest that IgY is the ancestral molecule to both IgG and IgE3. Molecular genetic studies have confirmed this 4,5,6,7,8